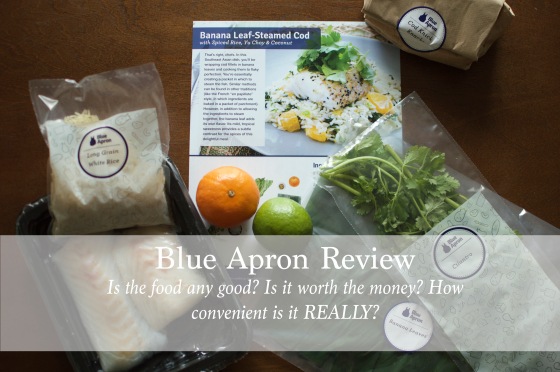 It’s no secret that I’m a below average cook. I’m not sure why either! I come from a family of amazing women that can cook their asses off. I even married into a family of women that can cook really well so I’m not sure where I went wrong. You’re probably thinking, “why do you care if you can cook or not? You have awesome cooks in your family, just let them do all the cooking.” Well, the truth is that I do care and I don’t know why. I’m a pretty creative person outside of the kitchen and I just figured that if I learned a thing or two or tried new things maybe something will click and I’ll turn into this Julia Child’esque chef and never depend on anyone else to make me a delicious meal!

So, with all of that being said, I signed up for Blue Apron. I’m not sure why I want to keep calling it Blue Ribbon, but I do. Anyways, it’s called Blue Apron and if you don’t know what it is you can check out their website here. But to make a long story short, they ship you everything you need to make a great meal. They have two different plans. One plan is for two people meals and the other is for four people meals. The cool thing about it also, is that you can skip weeks if you’d like. I don’t want them mailing me stuff every single week so I skip every other week. We get three meals a week, twice a month. Sam and I eat really boring things. I only know how to make a handful of things so as long as Blue Apron doesn’t send us sloppy joes, Old El Paso tacos, chicken pot pie, or DiGiornos pizza, then I’m fairly confident that we’ll be making things that we’ve never tried before. I always see recipes online that I’d like to try but then get discouraged when I see things like sage, turnips, gochujang, gai lan, etc. I don’t even know what those ingredients look like, let alone where the hell I’d find them if I wanted to attempt to make these crazy dinners. So Blue Apron sends you all of that stuff and I don’t have to go to the grocery store and make an ass out of myself looking for them!

My first Blue Apron delivery came this week and this is what I got: 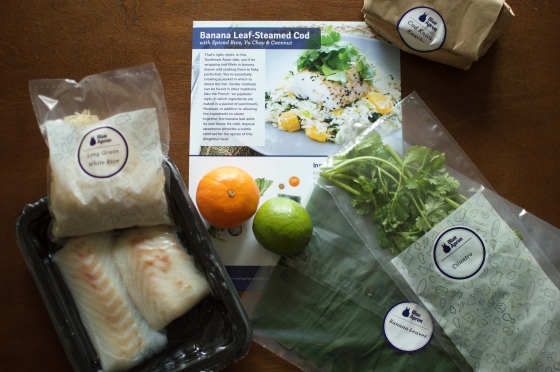 They suggest that if you receive any kind of fish in your package that you make that first, as it’s the first that will go bad if you keep it for awhile, so we made it on Tuesday. It was actually really good, really easy to make, and definitely something I would have never made if it weren’t for Blue Apron being so convenient. I’m not even much of a fish person and I liked it a lot. Last night I made the chicken charlemagne and I was quite impressed with myself because I’m usually awful at making chicken but it came out really tasty! And the potatoes AND parsnip mashed potatoes? Like, WHAT? Does everyone know about this? PARSNIP in the MASHED POTATOES? Because it was amazing and quite frankly blew my mind.

So, let’s break it all down. Sam and I have a grocery/food budget of about $300-$350 a month. That includes all of our take-out money and going out to eat money. We only go out to eat or order take out when we want something that neither of us can cook so Blue Apron sends us stuff that we don’t know how to make and teaches us how to make it for only $120/month. Which I think is a fantastic deal and based on the dishes that I’ve made, I’d definitely say it’s worth it so if you were on the fence about giving Blue Apron a shot, my recommendation would be to GO FOR IT!

I hope you guys enjoyed my first vlog!

Ok, maybe not the coolest app ever. Hay Day, Fruit Ninja, and Angry Birds may be a little more fun but this app that I found today called Key Ring is pretty awesome. I don’t know if I’m late to the party, so to speak, when it comes to this app but if you’ve never heard of it you HAVE to check it out. If you’re anything like me and have thousands of loyalty cards, reward cards, or membership cards attached to your car keys and key rings then this is a life saver!  I haven’t input a lot of my cards yet but so far it’s working great.

The cards I’ve added so far are:

I tried to add my Foot Locker rewards card but for whatever reason it wouldn’t scan the bar code and wouldn’t recognize it. It may be because the bar code was a little scratched. Not sure. And also, it didn’t have ShopRite as one of the recognized programs which kinda sucks because that’s where I do the majority of my grocery shopping, but it’s not going to kill me to keep one of my key ring cards on my actual key ring.

It will look like this when you open the app. You’ll be able to create an account that you can sync and access on multiple devices. I started using this app on my iPad and after syncing it and downloading the app on my Android smartphone, I was able to continue adding more cards and accessing the cards I had already added on my iPad. You’ll be able to start adding cards which goes a little something like this:

Sorry this picture is so blurry but I couldn’t scan the bar code and screen shot at the same time LOL!

Anyways, all you have to do is put the bar code in the red box and it automatically puts the numbers in the cards information profile. After you scan the bar code you’re just going to select the program. Whether it is a loyalty card, gift card, or some other kind of card. Then you just select the store that the bar code belongs to. It will also allow you to take a picture of the front and back of the card if you’d like.

One of the really cool things about this app is that it also tells you when there’s good deals, whether it be online or in stores.

As you can see with this Best Buy card it tells you that there are a few online deals and what not.

As you can see it indicates with the orange box when there are good deals that you may be interested in. It also tells you which card, or store rather, has a weekly circular.

I haven’t tried scanning it at any stores yet but if it ends up working it just lifted a ton of weight off my car keys and cleared a ton of room in my wallet! If you’ve been using this app let me know how you like it, if it works, what you like/don’t like about it.

By the way, this app is available on iPhones and Android devices!

Hello and WELCOME! My name is Katie. I’m 29 years old and I live in Easton, PA. If I’m not busy making a complete mess of something then I’m usually busy organizing it. I overanalyze almost everything and like to hit the ground running. I’d say I’m somewhat of a free spirit in a sense that I like to get up and go whenever the mood strikes. My blog is full of silly stories, organizational tips/tricks, some DIY projects, and a lot of sarcasm and usually an awkward amount of profanity. Enjoy!